Berry season is my favorite time to enjoy yogurt. It turns out, that it is very easy to make yogurt at home. 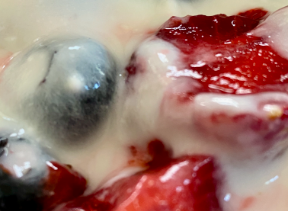 I hadn’t made yogurt in a long time and then I came across the recipe for “Dad’s Yogurt” in Priya Krishna’s wonderful book Indian (-ish). She boils 4 cups organic whole milk, cools it to 130 degrees F adds 1/4 cup plain full fat yogurt and then leaves it inside an oven which is off to incubate for 2 1/2 hours.

I made this recipe and it came out good - but I’ve since moved to use an Instant Pot for making Yogurt. Not that the first version is difficult in any way, but I find this easier and finally I’m using the Instant Pot that was sitting in the back room.

One thing I learned is that it is better to have an instant pot seal that you use exclusively for yogurt making. When I used my chili/soup/dals seal the yogurt had a distinct cumin flavor.