The last time I made giardiniera it was more of a traditional one. I left out the cauliflower because I leave it in the jar. I mixed peppers, carrots, celery, onion, and radish (I had some on hand), and green olives.

This time I just did peppers and olives. I had a ton of different peppers on hand from green bell peppers, to banana peppers, to jalapeno. 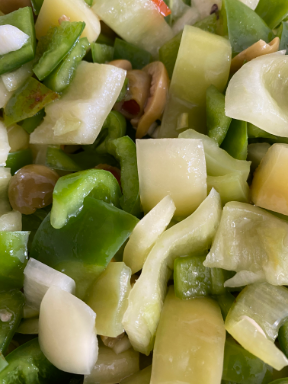 Step one is simple enough. Cut up the vegetables (not the olives) and toss them with half a cup of kosher salt. Cover this with water and refrigerate over night.

Some people wear gloves to cut the peppers. I didn’t. My fingers burned for a long time after. Some people are brighter than I am.

The next day, rinse the vegetables, drain them, then rinse again.

In a large bowl (I used plastic) combine a cup of white vinegar and a cup of canola oil with three cloves of garlic and some oregano. I had fresh from my garden and used about a tsp. If you use dry, double the amount. Last time I used a teaspoon of redder pepper flakes as well but this time I’m using enough jalapenos that I left them out. Cut up a cup of green olives and add them as well.

Mix in the cut vegetables and mix thoroughly.

Put in jars and back in the refrigerator.